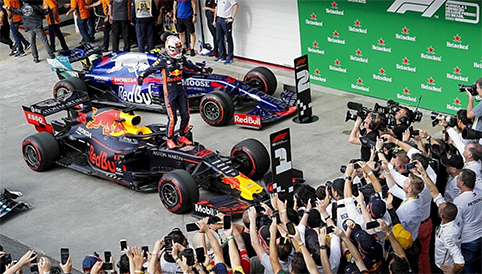 Max Verstappen won a crazy Brazilian Grand Prix in which the sister Red Bull outfit scored a podium result as the Ferraris crashed into one another.

Poleman Verstappen had to pass Lewis Hamilton on track twice to score his third victory of the season, while Pierre Gasly beat Lewis Hamilton in a drag race to the finishing line after being handed second position when Hamilton and Alex Albon collided on the penultimate lap.

A collision between teammates Sebastian Vettel and Charles Leclerc caused a safety car and set up a four-lap climax to a thrilling race, with Albon in second because Hamilton had made a switch to the soft compound under the safety and dropped to third.

Hamilton tried to pass Albon for second position on the penultimate lap but Albon turned in, they hit each other and the Red Bull spun, while Gasly jumped Hamilton and then somehow resisted the Mercedes on the run to the line.

Poleman Verstappen maintained the lead at the start as Hamilton attacked Vettel on the outside into Turn 1 and grabbed second.

Hamilton fell away from Verstappen through the first stint as Verstappen held a lead of around 2.4 seconds initially, which Hamilton had whittled down to 1.8 seconds when he dived into the pitlane at the end of lap 20.

That committed him to a two-stop strategy by switching to a fresh set of softs, and though Red Bull responded one lap later Hamilton’s massive pace advantage on new tyres meant he was set to jump Verstappen with relative ease.

He caught Leclerc, who was yet to stop having started P14, at the end of the lap but still moved ahead of Verstappen because Verstappen was baulked by the Williams of Robert Kubica in the pitlane.

Williams released Kubica but the Pole was slow away and swerved into Verstappen’s path at the exit, forcing Verstappen to take evasive action and then sit behind the Williams until they rejoined the circuit.

That allowed Hamilton ahead, but Leclerc put up a stern resistance through the rest of the lap, which meant Verstappen – also on fresh softs – closed back up immediately.

Hamilton passed Leclerc on the outside of the fast left-hander at the end of the middle sector but Verstappen followed him through immediately, diving down the inside of Leclerc into the Juncao left-hander that follows.

Verstappen was then immediately on Hamilton’s tail and dart past into Turn 1, as Hamilton ran out of battery power at the end of the lap and moaned to his team for a lack of information.

The lead gap gradually extended to more than three seconds as Hamilton got annoyed, insisting he could not close the gap and requesting to stop to try to force the undercut again.

Mercedes obliged on lap 43 of 71, but Red Bull covered the move one lap later again and Verstappen retained track position.

He proceeded to keep Hamilton at arm’s length until a safety car emerged with 18 laps remaining, when Valtteri Bottas, who was in a frustrated fifth position behind Leclerc, was forced to retire after an apparent engine failure.

Bottas slowed exiting Turn 3 after smoke emerged from the back of his Mercedes before pulling to a halt on the inside at Turn 4, which was initially dealt with using double waved yellow flags but required a safety car when a recovery vehicle was deployed to retrieve the Mercedes.

Hamilton stayed out while Verstappen dived into the pits for another set of softs, and Hamilton opted not to pit next time by either – giving him the lead, but with tyres 11 laps older than Verstappen’s.

When the race resumed, Hamilton led Verstappen, Vettel, Albon and Leclerc – with Vettel and Albon sticking with tyres they had only just switched to three laps before the safety car, and Leclerc stopping for another set of softs.

Hamilton backed the pack up aggressively at the restart to thwart Verstappen’s attack, but Verstappen drew level on the outside into the first corner and toughed it out to reclaim the lead into the second part of the Senna S.

Behind, Albon aggressively took third from Vettel, then rebuffed the Ferrari’s attempt to reclaim the position into Turn 3.

Albon closed in on Hamilton for second but found himself under attack from Vettel again when the Ferrari launched a move around the outside into the first corner with seven laps remaining, but Albon somehow resisted.

Two laps later, Leclerc mugged teammate Vettel on the inside into the first corner, but when Vettel fought back on the run down to Turn 4 he moved left and the two Ferraris hit each other.

The impact broke Leclerc’s front right wheel and forced the two-time race winner into retirement, while Vettel – who blamed Leclerc – picked up a right-rear puncture.

That triggered at a safety car under which Hamilton dived into the pits yet again, dropping him to fourth behind Albon and Gasly.

A two-lap dash to the flag ensued after the safety car period ended, in which Albon and Hamilton collided – Hamilton accepted the blame for the incident, which dropped Albon to P14.

Gasly then earned his stunning podium finish by keeping Hamilton behind until the Mercedes drew level exiting the penultimate corner, but the Honda-powered Toro Rosso stayed ahead in a near dead heat.

Behind the top three, Carlos Sainz Jr matched McLaren’s best result of the year by making the most of the chaos to finish fourth despite starting last after failing to take part in qualifying.

Kimi Raikkonen and Antonio Giovinazzi nailed Alfa Romeo’s best result of the season in fifth and sixth, ahead of Daniel Ricciardo, who fought back from a broken front wing and a five-second penalty early on in a collision with Kevin Magnussen to finish seventh.

So a fantastic race with Max Verstappen scoring his third victory of the season. This was a redemption from last year’s Brazilian Grand Prix, when he was taken out by Esteban Ocon.

As for Pierre Gasly, this second position is a brilliant achievement for Scuderia Toro Rosso. This is his first podium finish and despite being dropped by the main Red Bull team over Albon mid season, Gasly scored a well deserved result. 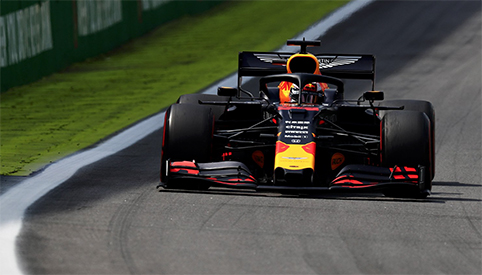