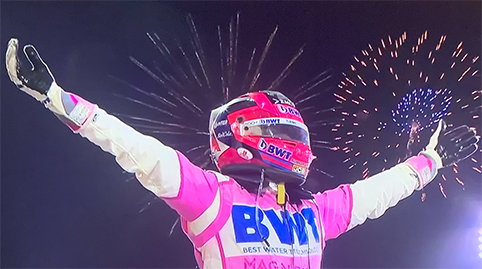 Esteban Ocon finished second for Renault ahead of Lance Stroll’s Racing Point, with the Mercedes cars down in eighth and ninth – Valtteri Bottas, also delayed significantly in the pitstop fiasco, in front of Russell.

Perez also faces a post-race investigation over a lap one incident that eliminated Charles Leclerc and Max Verstappen, in which Perez was spun around and fell to the rear of the field.

At the start, Bottas and Russell launched in unison from the front row, but Bottas was slower in the second phase and Russell pulled alongside, with Max Verstappen having a look in between them.

Russell seized the lead at the apex of Turn 1, with Bottas forced wide and then sliding at the entry for Turn 2, which let Russell run free and bunched the pack up behind.

This ended in contact at Turn 4 – the right from the traditional Bahrain Grand Prix layout where the drivers then sweep quickly left to start the outer loop – despite Verstappen braking early behind Bottas and the attacking Perez on the outside.

Bottas locked up but stayed clear in second, as Perez swept into the Turn 4 apex and collided with a locked up Leclerc, who suffered a broken left-front in the contact while the Racing Point was spun around.

Verstappen stayed free of contact but seemed to carry too much speed through the gravel trap beyond Turn 4 and he slid into the barriers and out, with the safety car deployed immediately.

The race resumed at the start of lap seven of 87, with Russell already well clear as he crossed the safety car control line and Bottas under pressure from Carlos Sainz, who had risen to third in the first lap chaos.

Sainz attacked Bottas into Turn 1 and held on around the outside take second, but he slid out of Turn 2 and cut the oncoming Turn 3 kink, which allowed Bottas back to second.

At the end of the first lap back at full speed, Russell had a lead of 1.1 seconds, which he set about extending as the Mercedes drivers were the only ones to run in the low 58 seconds.

This quickly pulled them well clear of Sainz, who headed a train of runners during the opening phase of the race, before Bottas was able to stabilise the gap when it reached 2.4 seconds on lap 17.

Bottas edged back towards Russell as the Mercedes drivers were told they were well over their target for stopping before George was able to extend his lead again approaching one-third distance.

As the rest of the top ten runners, most of whom had started on softs compared to the mediums on the Black Arrows, stopped, the two leaders were soon lapping backmarkers, which caused the gap between them to fluctuate.

Russell’s lead was 3.1 seconds when he came in to change to the hards at the end of lap 45, with Bottas left out for a further four laps.

Despite a scare with a sensor issue, which caused Russell to report “no power” on his out-lap, the significant undercut factor meant Russell’s lead ballooned to 8.5 seconds at the end of Bottas’s out-lap.

Both Mercedes drivers were then warned about the loads their left-front track rods were taking through the punishing Turns 7/8 chicane, before a virtual safety car was called when Nicholas Latifi pulled over on the inside of Turn 8 and retired due to a suspected oil leak.

Bottas had cut Russell’s lead to under five seconds with strong pace on his new hards either side of the VSC, but the race was then turned on its head when a second safety car was called after Jack Aitken spun off at the final corner and wiped the nose off his Williams.

A second VSC was upgraded to the full safety car so the debris could be recovered and Mercedes called its cars in for what turned out to be a calamitous double-stack stop.

After Russell had a slightly slow change he was sent out with a mixed set of mediums and had to be called in again a lap later, while Bottas lost nearly half a minute waiting as the team realised the error and sent him back out on the same hard tyres he had taken at his first stop.

The Mercedes pitstop gaffe meant that Perez, who had pitted for hards before the first VSC has he quickly recovered up the order following his first lap off, led ahead of Esteban Ocon and Lance Stroll – as those that had been following Mercedes had come in during the Latifi VSC.

The race restarted again on lap 69, with Perez romping clear as Russell ran behind Bottas before nipping up to P5 when his teammate ran deep at Turn 4 on lap 70, which left Russell with the chance to muscle his way by over the bumps into the chicane.

Russell the quickly dispatched Stroll and Ocon on successive laps shortly afterwards, which left him with a 3.4 seconds gap to close to Perez.

The Briton set a series of fastest laps, but then a left-rear slow puncture forced Mercedes to stop him for a fourth time – for softs – and dropped him out of contention.

Perez had kept up his pace and pulled away from Ocon over the rest of the race and came home to take a sensational first F1 win by 10.5 seconds.

Sainz finished fourth as Bottas’s faded badly on his hard tyres, slipping down the just before Russell had to pit for his puncture.

Daniel Ricciardo finished fifth ahead of Alex Albon and Daniil Kvyat, then came the Mercedes cars.

Russell had rejoined from his final stop in P14, but was able to use his softs to scythe back up the order and claim his first F1 points finish.

Lando Norris completed the top 10 ahead of Pierre Gasly and Sebastian Vettel.

Aitken and Pietro Fittipaldi finished their first Formula 1 races in P16 and P17 at the rear of the field.

So an exciting and dramatic race. Congratulations to Sergio Perez in winning his first Formula 1 race. It was an epic fightback from Checo to come through the field following a spin on lap 1. To take victory for Racing Point is a magnificent result. Do feel sorry for George Russell, who led the early part of this race. But the double stacking pitstop went wrong and a late puncture ruined the chance to score a victory or podium. At least Russell was able to score a championship point with a top ten finish. This is racing. 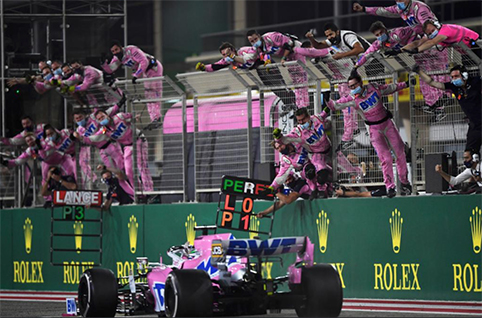